Yersiniosis is an acute bacterial enteritis caused by the bacterium Yersinia enterocolitica. Symptoms include diarrhea, fever, and abdominal pain. In infants and young children, diarrhea and fever predominate. Bloody stools are noted in 10-30% of children with yersiniosis. In older children, adolescents, and young adults these symptoms are often accompanied by right lower quadrant abdominal pain and leukocytosis, and is frequently mistaken for appendicitis. Up to 50% of adult cases will have joint pain, some of which will clinically display a post-infection reactive arthritis. Other less likely complications include erythema nodosum, abdominal abscesses, and bacteremia.

Most people become infected after eating raw or undercooked pork, or by accidentally consuming the organism following contact with contaminated hands or environmental surfaces during or after the preparation of pork. Yersinia is a hardy organism, because it can survive in very cold environments (refrigerators) and on surfaces (food containers, kitchen counters and utensils) for long periods of time. This is why careful preparation of food is as important as cooking the food. Children, particularly infants and toddlers, should be removed from the kitchen while preparing pork or chitterlings, at least until all surfaces that may have come in contact with the food have been cleaned with soap and hot water.

There are several ways to prevent yersiniosis:

For healthcare professionals
Yersinia can be identified through culture and culture-independent methods. Most cases of yersinosis are self-limiting. However, yersiniosis may be treated with antibiotics like co-trimoxazole and ciprofloxacin. For serious infections, aminoglycosides can be used.

Reporting and Surveillance
Yersiniosis is a reportable disease in Georgia. All laboratory positive results are reportable to the Georgia Department of Public Health.

Since 2015, Georgia has seen an increase in the number of reported cases of yersiniosis. 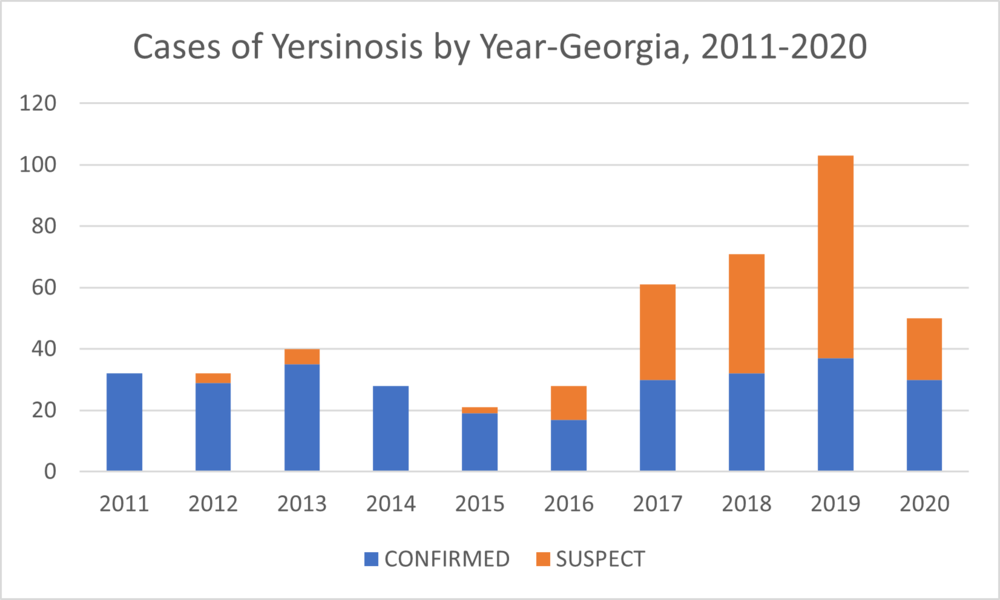