Campylobacteriosis is an enteric illness most commonly caused by the bacteria Campylobacter. CDC estimates that infections with Campylobacter cause almost 1.5 million illnesses in the United States every year.

Campylobacter Basics
Campylobacteriosis is an acute bacterial enteritis caused by the bacterium Campylobacter. Symptoms include diarrhea, fever, and abdominal pain. The diarrhea may be accompanied by nausea and vomiting. These symptoms usually start within two to five days after exposure and last about a week. Some infected people do not have any symptoms. In people with weakened immune systems, Campylobacter occasionally spreads to the bloodstream and causes a life-threatening infection.

Most illnesses likely occur due to eating raw or undercooked poultry, or to eating something that touched it. Some are due to contaminated water, contact with animals, or drinking raw (unpasteurized) milk.

There are several ways to prevent Campylobacteriosis:

For healthcare professionals
Campylobacter can be identified through culture and culture-independent methods. Although people with Campylobacter infection usually recover on their own, some need medical treatment. Antibiotics are needed only for patients who are very ill or at high risk for severe disease, such as people with severely weakened immune systems.

Reporting and Surveillance
Campylobacteriosis is a reportable disease in Georgia. All laboratory positive results are reportable to the Georgia Department of Public Health.

Since 2016, Georgia has seen an increase in the number of reported cases of Campylobacteriosis. 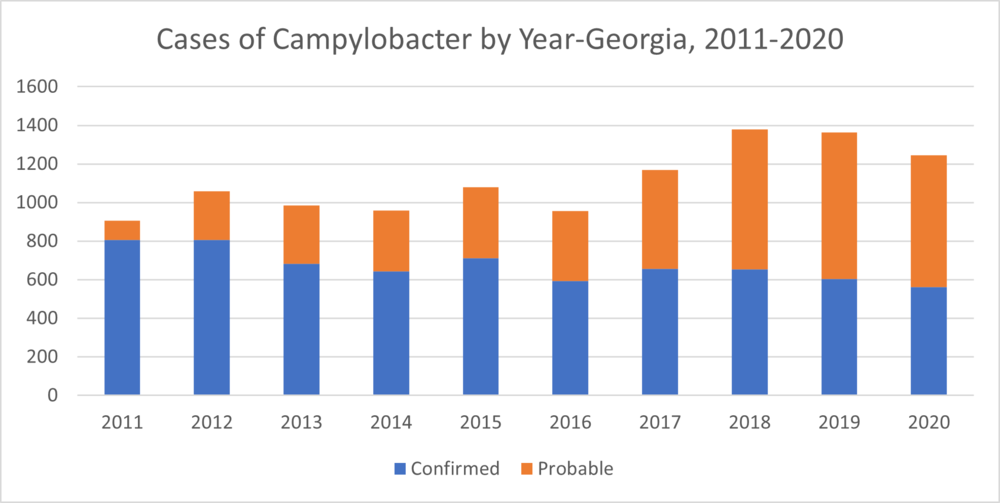